One day near a gas station there was a Dominoes Pizza restaurant.  In there was a pizza box.  Pete the Pizza was waiting in there with his pizza friends waiting to be eaten and he yearns to start his journey down the digestive system.  Pete is a pepperoni pizza with lots of cheese and tasty crust.

The next day the box opened.  A boy named John picked up Pete.

“Ahhhhhhhhhhhh!”  screamed Pete as he got lifted up and got bitten, “Ouch!”  Pete looked up in John’s slimy mouth, full of saliva, as he got pushed back by his tongue.  Pete then saw himself and sees he has turned into a ball of food, the bolus.

Before he knew it, Pete was down the esophagus riding down.

“Woh!”  exclaimed Pete.  The floor was full of mucus that made it so slippery.  Pete continues to fall down the slippery passageway to his next destination, the stomach.

“Thud!”  Pete fell down to the stomach, “Ouch!!!”  Pete looked around and saw he was in the stomach overflowing  with acids.

As the stomach mixed, four hours has passed.

“How long are we gonna be in here?” said Brian.  Suddenly they were being sucked in to the small intestine. 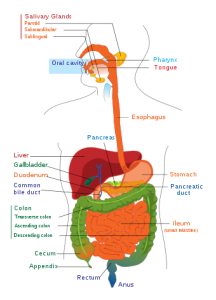 The small intestine was full of digestive juices produced by the liver.

After that they were brought into the large intestine.

“It stinks so much in here”, Brian said.  “I know”, replied Pete.  They then figured out they had become feces.

“Is this kid constipated or what because he’s been sitting on this toilet for half an hour already”, said Brian.

“Hello” a banana said behind them, “John sent me here to come and help you”.  “Finally”, said Pete relieved.  Then the banana helped push Pete and Brian out of the anus.  As John flushed, they all said goodbye and were ready to go down the sewer to their next journey.